As a trader, you should be familiar with one of the most popular theories in technical analysis — the Wyckoff Price Cycle Theory.

This type of market analysis will help you better understand how banks trap us and why traps are created in the market.

I’m not going to cover the theory in detail, because you don’t really need to know everything about it.

All you need to know is the most important part that will help you identify bank breakout traps with high accuracy.

The Wyckoff theory was developed by Richard Wyckoff. He was a famous stock trader and investor who was born in the late 19th century.

It is widely used by most banks and financial institutions and also by most successful professional traders, including the legendary trader Jesse Livermore and James Keene.

The Wykoff theory states that the price cycle of a traded instrument consists of 4 phases.

See the illustration below:

The accumulation phase: In this stage, the market enters into a ranging period.

It is a period when banks and institutional traders are busy accumulating long positions, with the intention to push the market higher when they have accumulated enough positions.

To attract more opposite orders to fill up their position, they set some traps to motivate retail traders to enter the market on the short side by inducing a downward breakout of the range market.

As retail traders jump on the short side, the banks get their buy orders filled and then push the price up as they initially intended.

Look at the illustration above to see the downward breakout trap that happened during the accumulation phase before the strong move upwards.

The trend up: This is the second stage of the Wyckoff theory cycle.

After the banks have filled their long position by trapping retail traders on the short side, they push the price through the upper level of the range.

That is, the market goes out of the consolidation period and trends up.

The distribution Phase: This is the third stage of the Wykoff price cycle. This phase is where banks who bought in the accumulation phase try to exit their orders.

In fact, banks don’t act like us (retail traders) when they take profits. They don’t exit their trades at once because they have huge amounts of money and have different orders and stop losses in the market.

So, when they take profits, they exit their trades step by step in order not to create panic in the market.

If they exited all the buying orders, the market would go down strongly, and other banks will get out of the market.

As a result, the price will decline significantly and erode their profits or even trigger their stop losses.

This is why they take their profits gradually, and when they start taking profits, the market enters in a ranging period.

The trend down: This is the last stage in the Wyckoff theory.

When the banks (buyers) start taking profits, other banks set traps to find more buyers to fill their short positions, and when they get enough power to push the market in the bearish direction, prices break the lower level of the flat range and go down.

Let’s take a real chart example to understand how the market moves according to the Wyckoff price cycle theory. 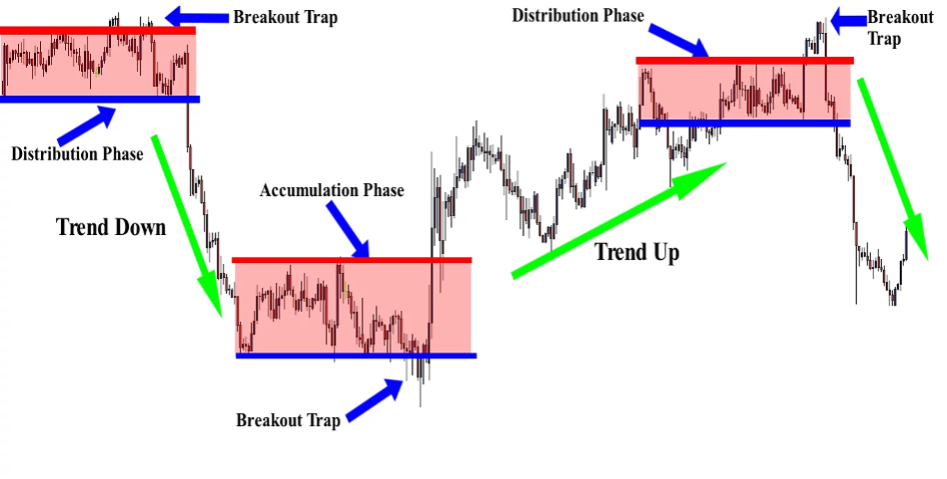 For example, the end of the distribution stage, as you see in the chart above, is the beginning of a downtrend, which could be traded to the short side.

On the other hand, the end of an accumulation stage is the beginning of an uptrend, which could be traded to the long side.

We will never know when the accumulation or the distribution phase is over. But it is important to know about the price cycle theory so you can understand what happens in the market.

As retail traders, our task is to follow banks and financial institution footprints by identifying their traps and watching out for the big move.

As you can see, most traps happen either during the accumulation or the distribution phase.

In other words, traps happen when the market is ranging. These traps can also happen during the trend down phase and the trend up phase.

Let me give you an example below: 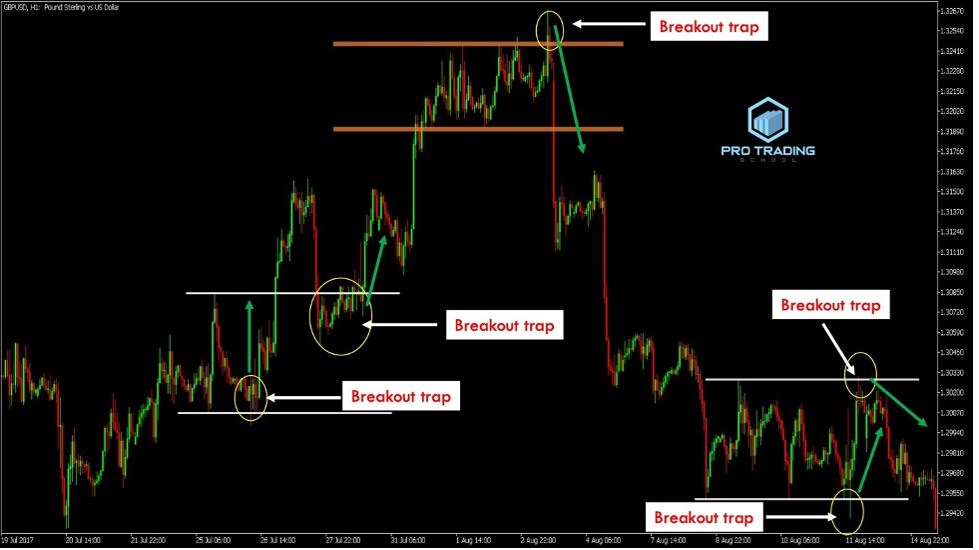 As you can see in the GBP/USD H1 chart above, the market was trending up, and during the trend up phase, the market creates some traps that we can consider as high probability setups to enter the market.

Look at the first trap and the second trap.

Once the uptrend is over, the market enters into a range (distribution phase), which means that prices start moving between horizontal support and resistance.

As you can see from the chart, there is a clear breakout trap that formed at the resistance level before the strong move down.

Once the downtrend is over, the market starts ranging (accumulation phase). In that chart, we can see two traps that formed at the support and the resistance level during the accumulation phase.

When analyzing your charts, don’t focus on the market phases. Don’t bother asking yourself whether it is a distribution or an accumulation phase; what matters is the market structure.

If the market starts moving horizontally between support and resistance, it is ranging, and you should watch out for traps at either the support or the resistance level.

If the market is trending up, look out for traps in line with the uptrend in that same trading timeframe.

If the market is trending down, look out for traps in line with the downtrend in the same trading timeframe.

Let me give you another example with the chart below: 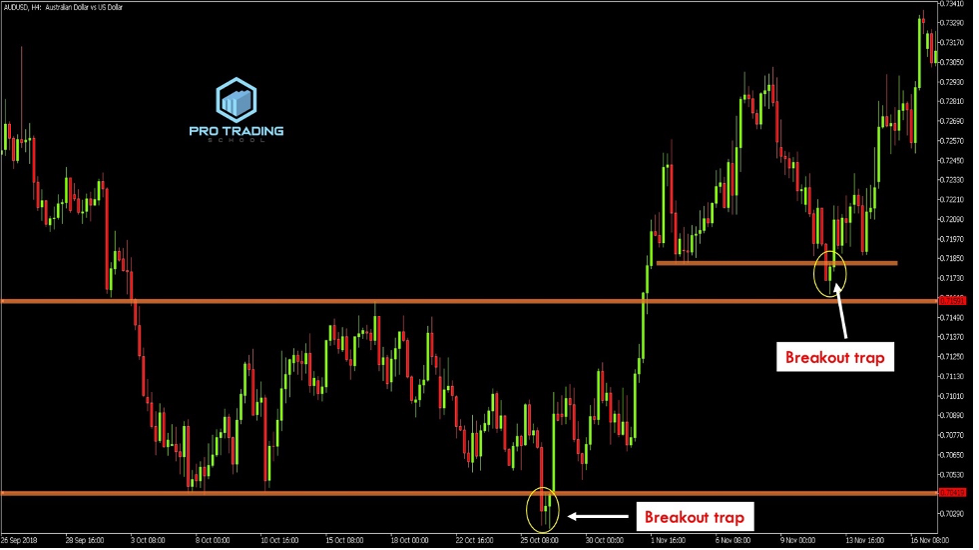 This is an AUD/USD H4 chart. As you can see, the market was trending down and later started ranging.

Notice the bank breakout trap that happened at the support level. That was a high probability setup to enter the market.

After the breakout from the range, the market started trending up. It then formed another breakout trap at the next support level in line with the uptrend.

This breakout trap is also a good opportunity to enter the market and make some money.

Let me give you another example with the chart below: 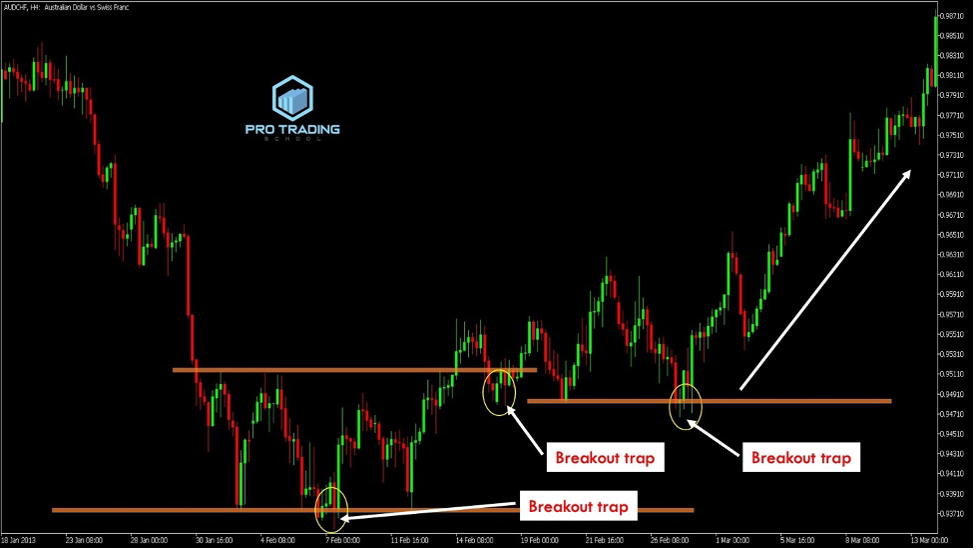 As you can see in the AUD/CHF H4 chart above, the market was trending down but later started ranging.

Then, a bank breakout pattern formed at the support level, presenting a good opportunity to enter the market.

Another opportunity to enter the market was formed at the new support level, where the market created another breakout trap; this fake breakout can be used as an entry point to place a buy order.

I believe that now you’ve started understanding how the market moves according to the Wyckoff theory and how to spot high probability setups based on bank breakout traps.

This exercise will help you train your eyes on how to spot these traps easily when you look at any price chart.

I also want to thank you for the time spent reading this post. you can learn more from our free telegram channel where i share more knowledge and give out 2 to 3 life forex signals per week for free .