To become a successful trader, you need to accept the fact that the market is full of traps.

Unfortunately, that is the nature of financial markets. Banks and financial institutions make money trapping retail traders, so if you can’t accept this truth and start learning about these traps, you will sooner or later be out of the game.

Winners in this industry always work on building their knowledge base and skill set to better understand how the market works rather than merely complaining.

So, you need to learn about traps in the market and how to use them in your favor.

Understanding how the market works gives you an edge over those who merely ignore little details, especially when it comes to traps and manipulations.

The thing is, when you get trapped, you lose money; you can even lose your entire trading account if you don’t really know how things work.

As retail traders, we can’t control or change how banks and financial institutions play the game.

They are more powerful than us: they have huge trading accounts and can move the market whenever they want.

So, the only way we have to survive in the market is to study their strategies and tactics and follow their footprints.

Banks and financial institutions know how retail traders analyze and trade the market; they have teams of technical analysts who analyze charts and find the most important patterns retail traders use to find their entries.

So, they use this knowledge to trap retail traders and take their money in a smart and easy way.

One of the strategies that banks and financial institutions use to manipulate retail traders is what we call the Bank Breakout Trap.

So, what is this bank breakout trap?

The bank breakout trap happens when the price breaks out of an obvious level but then suddenly changes direction.

When the initial breakout happens, many traders enter the trade in the direction of that breakout.

These traders become trapped when prices reverse, resulting in a cascade of stop-loss orders triggered.

Understanding what is going on, new institutions enter the market as well, and this further puts pressure on the price.

This reaction evolves into a new trend opposite to the initial breakout. 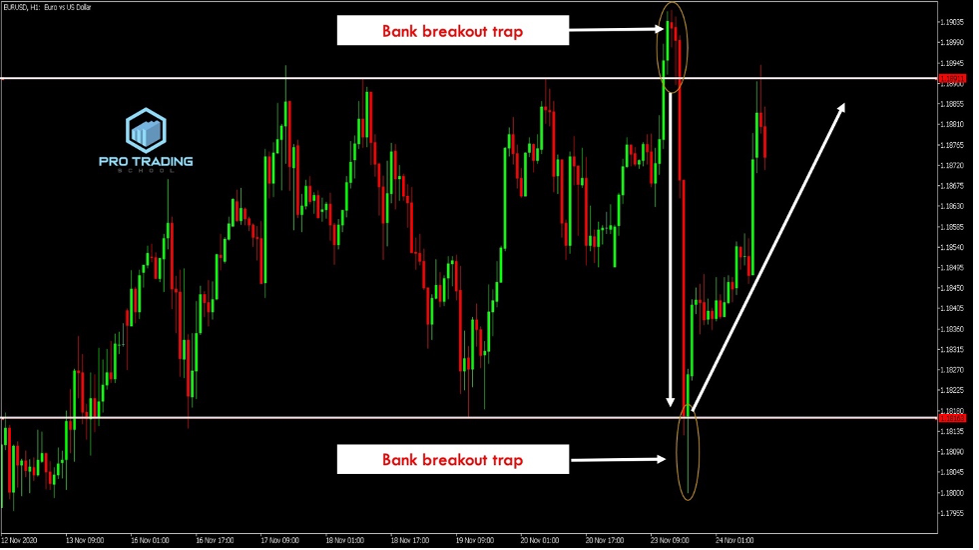 As you can see in the EUR/USD H1 chart above, the market was ranging and formed two bank breakout traps at the boundaries of the range.

Banks and financial institutions often use ranging markets to set their traps and manipulate retail traders.

In that chart, you can obviously see a bank breakout trap that was formed at the resistance level.

The market broke above the resistance level and gave us the impression that the range-bound movement was over and a new uptrend was likely emerging.

Of course, the trapped traders entered the market following the breakout and, expectedly, placed their stop loss below the resistance level.

When the price reversed, those traders who were tricked by the false breakout were stopped out as the price fell vehemently.

More likely than not, new financial institutions joined the down move because they are used for trading these lucrative patterns.

The same thing happened when the market reached the support level.

Institutional buyers pushed the market lower to give us the impression that the market broke below the range and will start going down.

As retail sellers entered the market, these buyers pushed prices upwards, above the support level. This pattern is called the bank breakout trap.

If you are not aware of the bank breakout trap and how to use it to your favor, you will lose a lot of money.

Banks and financial institutions know how you think and will always trick you to the wrong direction.

When you try to predict a breakout of a key support or resistance level early, they give you what you want — they break the key level.

If you enter the market based on that, you will be surprised how your stop loss will immediately get triggered, as the market reverses sharply and goes in the opposite direction.

Let me give you another example with this USD/JPY daily chart below: 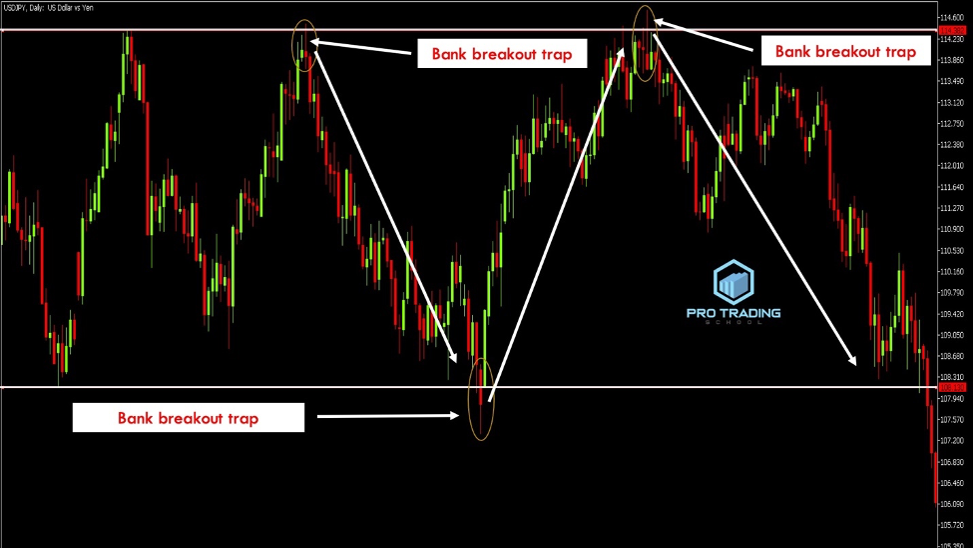 As you can see from the chart above, the market was ranging, which means that buyers and sellers were in equilibrium. No one is dominating the market.

Most traders wait for a ranging market to break out of the resistance or the support level before they make an entry since the breakout of one of these levels indicates the end of the ranging period and the beginning of a new trend.

Of course, amateur traders want to enter at the beginning of the breakout so as to ride on the new trend.

Banks and financial institutions understand how most of us, retail traders, think, so they create the scenario we are waiting for.

And when we feel it is safe to put our money in the market, they enter to take our money and then go in the opposite direction.

We will study the different bank breakout trap patterns in detail in future lessons.

This post is just an introduction to these concepts so you can have an idea of what we are going to study.

They are not only seen on ranging markets; they can also be seen in trending markets.

See an example in this AUD/CHF H4 chart below: 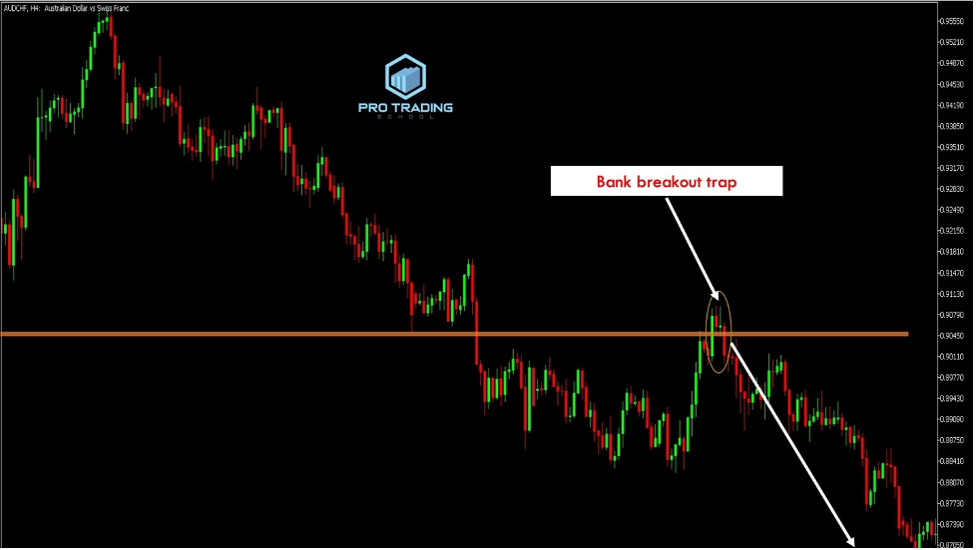 As you can see, the market was trending down, and when it retraced to test the resistance level, it broke above it, giving the impression that a reversal is likely to happen.

Once buyers got trapped at this breakout, sellers pushed the market lower in line with the downtrend direction.

In this example, amateur traders tried to enter at the beginning of the breakout so they can ride the reversal, but the breakout was just a bank trap.

Look at another example below: 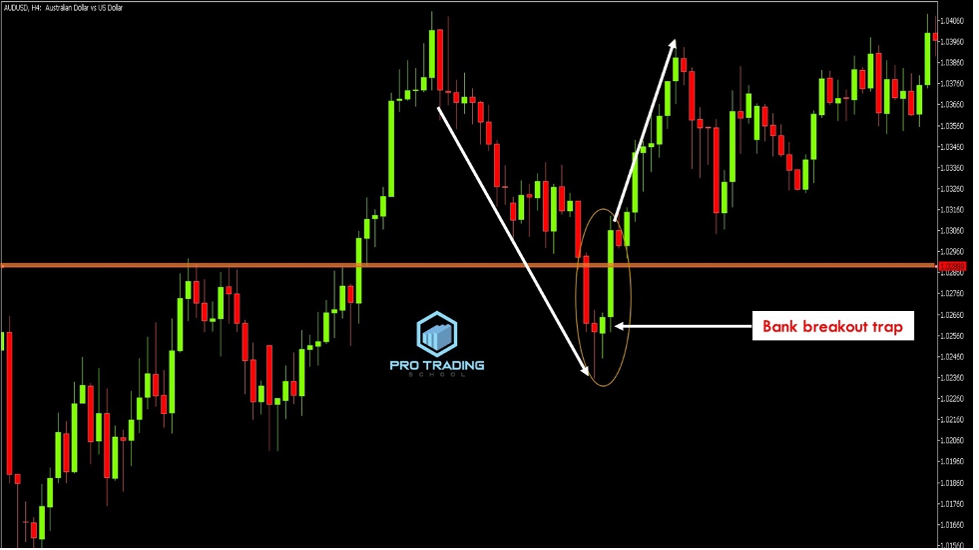 As you can see, this is an AUD/USD H4 chart. The market was trending up, which means that buyers were dominating the market.

As the market broke the resistance level, that level became a support level. But when the market retraced to test it, it broke below it.

This gave the impression that the market would keep going down, but what happened was that after the close of the red candle below the support level, buyers pushed the market higher again, leaving sellers in a bank breakout trap.

Bank breakout traps frequently happen in the market, both ranging and trending markets.

If this has happened to you a couple of times and you don’t really know the reason why, then, you are lucky to have gotten this course.

Now, you will learn how banks take money from you and how to identify the bank breakout trap patterns so you can take advantage of them instead of being a victim.

Trading the bank breakout trap is easy. It doesn’t require big knowledge, and the rules are very simple for even beginner traders. The reward-to-risk ratio is amazing; you can risk 20 pips to win more than 200 pips.

I have made most of my money as a trader by using contrarian trading approaches like supply and demand zones and bank breakout traps.

I’m quite sure that these strategies will allow you to profit from other traders’ misfortunes.

This may sound a little harsh, but it is the reality of trading — the majority of traders lose money.

I hope you are aware of how lucky you are to have to get access to this information. When I first started, I couldn’t find anyone to guide me or show me how to play this game, and I lost a lot of money; in fact, I was about to lose everything because of my lack of knowledge.

I really want you to take your time to read and understand what I’m sharing with you in this course because if you can master how banks and financial institutions trap retail traders, making money trading financial markets will be the easiest thing you can do in your life.

The Doji Bank Breakout in Combination with RSI Divergence 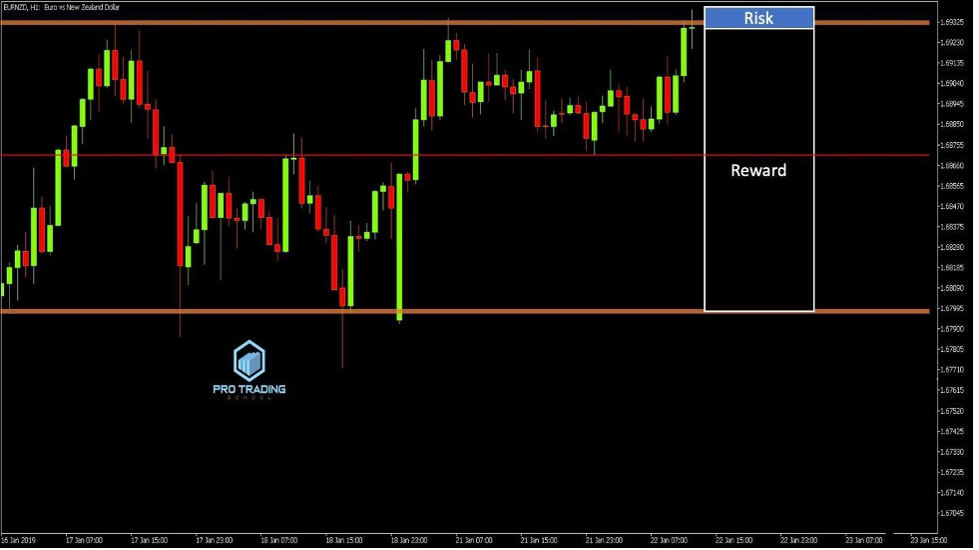 The Doji Bank Breakout in Combination with RSI Divergence