As its name implies, the pattern is made up of two consecutive peaks that are roughly at the same level and a moderate trough in between.

Look at an illustration in the image below: 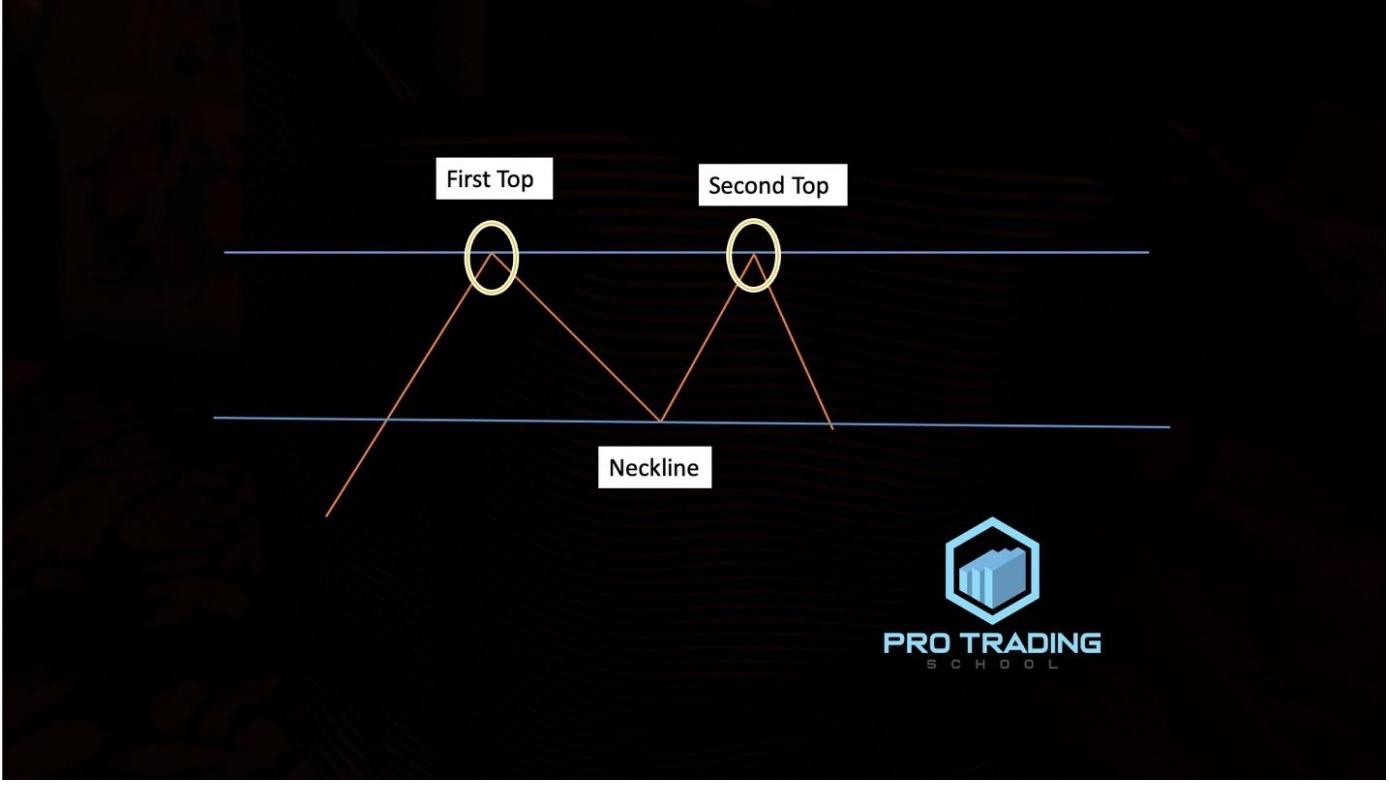 As you can see from the illustration, this price action pattern involves the formation of two swing highs that end at a critical resistance level.

The idea that the market was rejected from this level not once, but twice, is an indication that the level is likely to hold.

How to Identify a Double Top Pattern

For a double top pattern to be valid, it must meet the following criteria:

Let me give you a real chart example just to show you the necessary elements we need to identify a valid double top chart pattern.

See the AUD/USD H1 chart below: 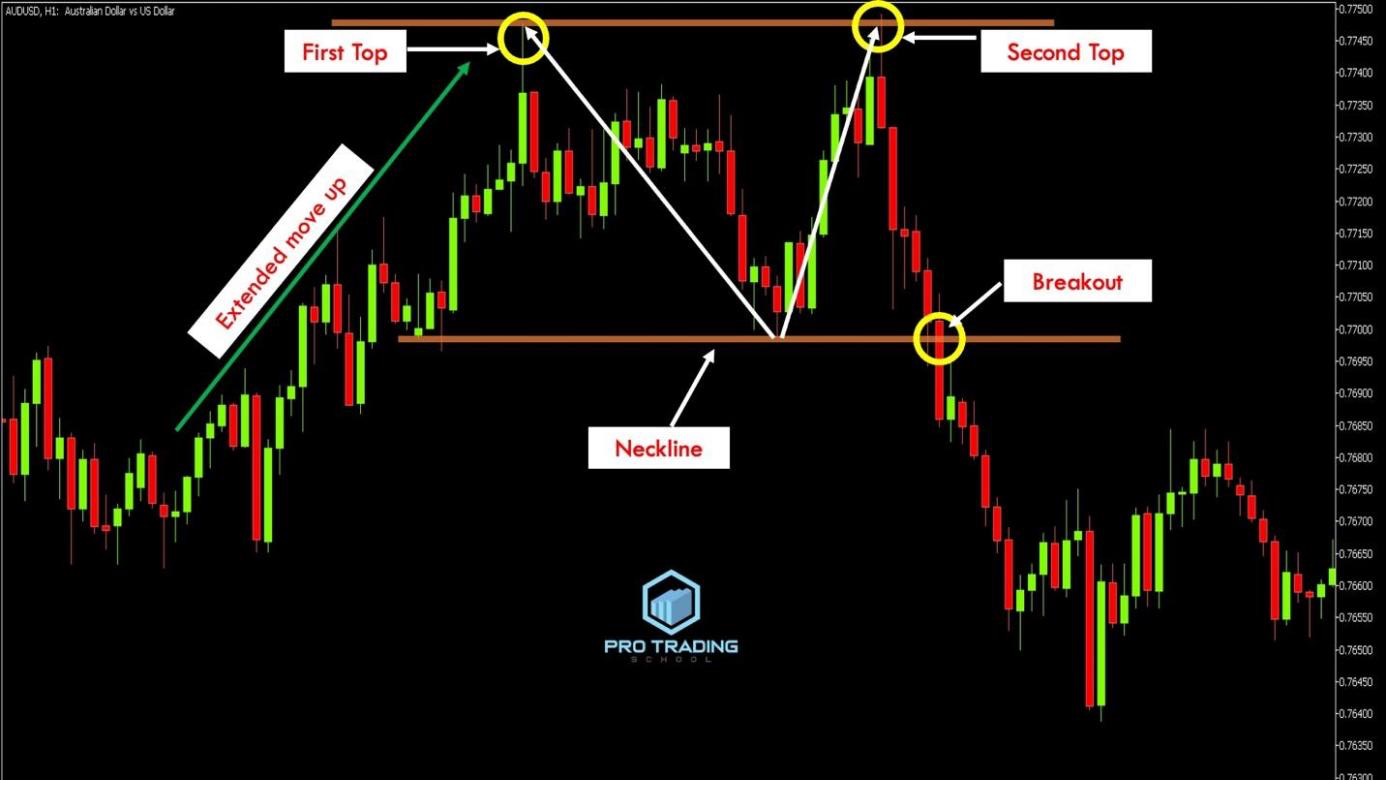 As you can see, the market made an extended upswing but was quickly rejected at a resistance level, forming the first top.

The market then pulled back to a support level and subsequently rallied to retest the same resistance level. It got resisted at that level, giving rise to the second top.

So right now, we have four important elements in hand:

Let me give you another chart example below : 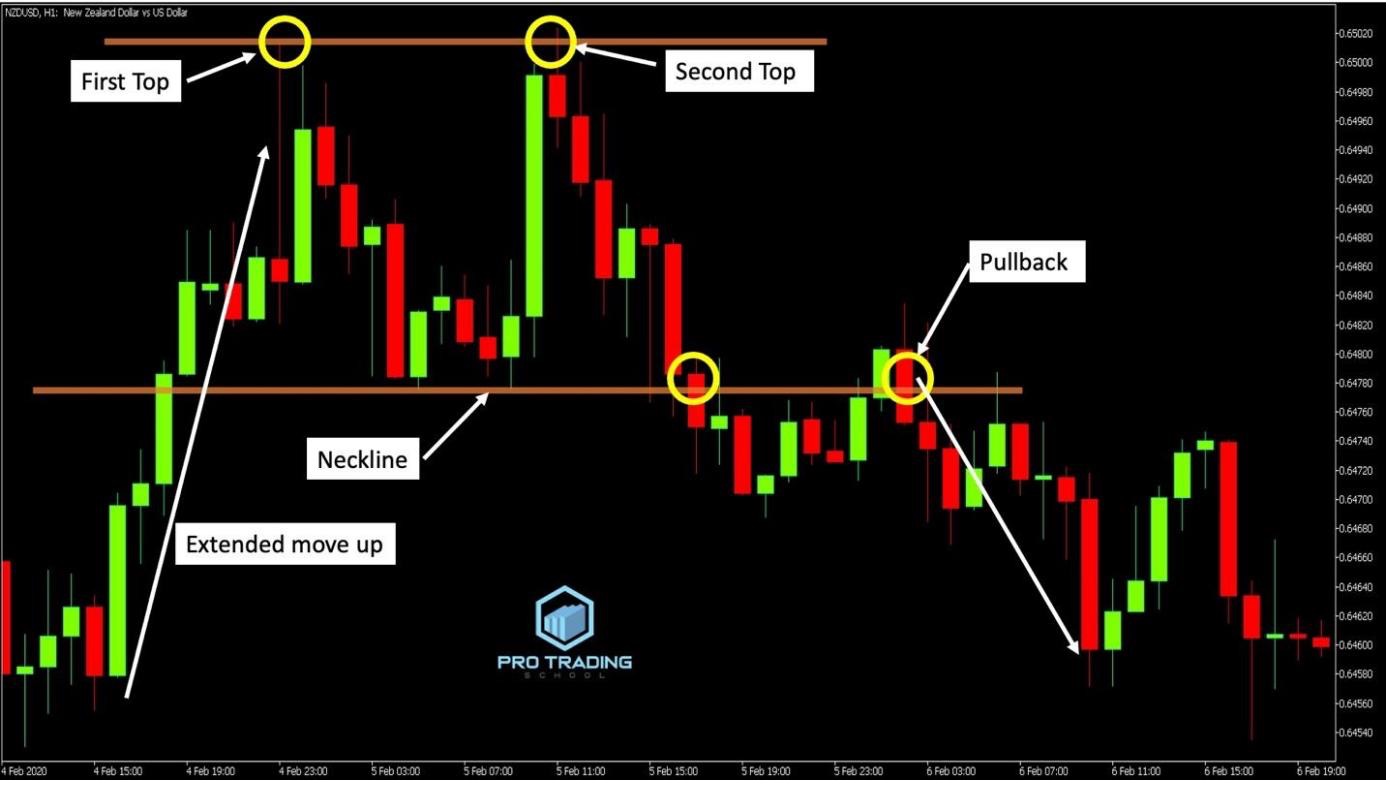 As you can see in this NZD/USD H1 chart, the market formed a nice double top chart pattern that has the four elements of a valid double top reversal pattern, which are the extended up move, the first top, the second top, and the neckline.

This pattern can be traded either with the breakout of the neckline or when it pulls back to retest the neckline, which has then become a resistance level.

You can even trade it at the right at the second top if there are other factors, such as a false breakout (bank breakout trap) or a bearish divergence, forming a confluence at that level.

Before we move to the trading technique, let me tell you the psychology behind this chart pattern formation.

This is very important because if you don’t understand why this pattern forms in the market, you will not have solid reasons to use it as a trading strategy to enter and exit your trades.

So, what is the psychology behind the double top chart pattern formation?

To help you understand the psychology behind this chart pattern formation, let me illustrate with the EUR/NZD H1 chart below: 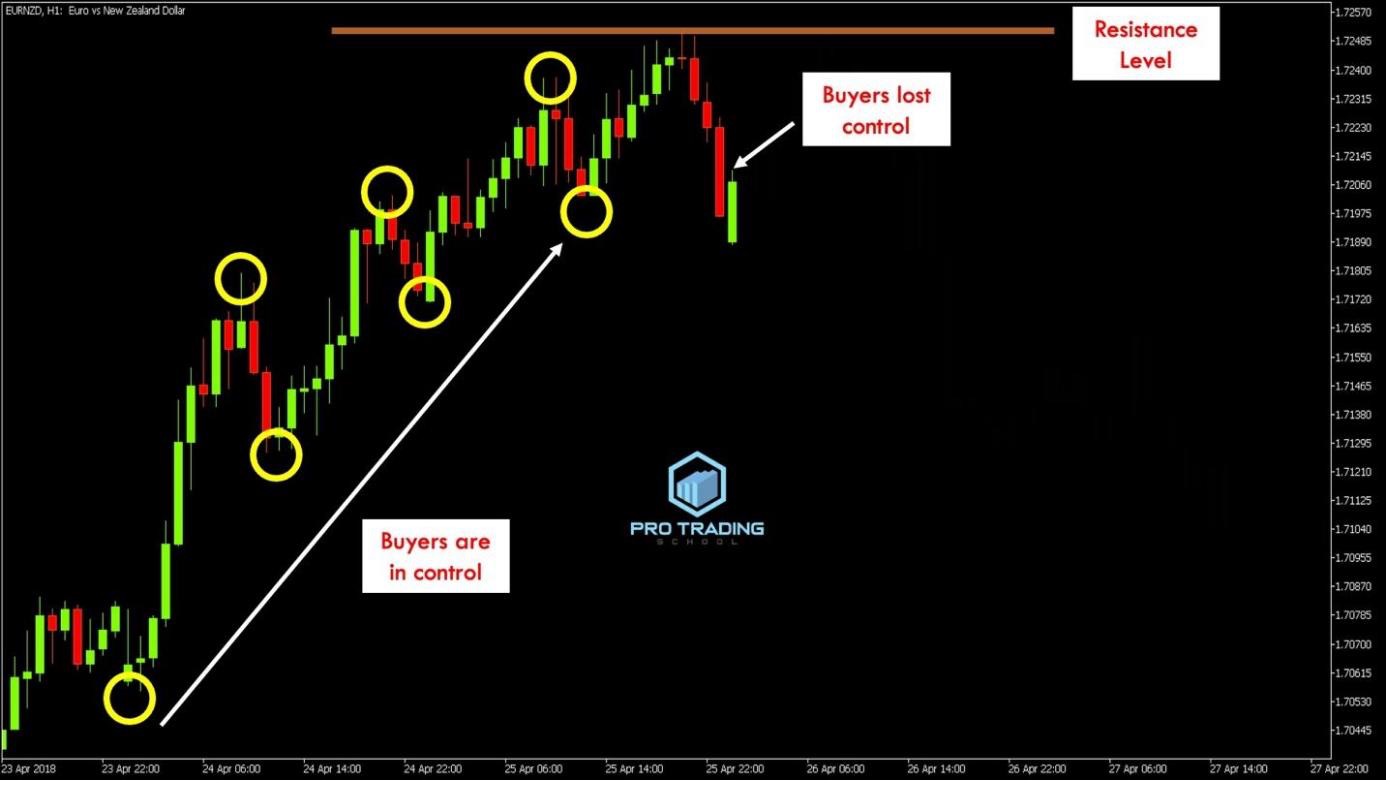 As you can see, after an initial uptrend, or an extended upswing, the price got to an area of resistance where sellers entered the market and managed to overcome buyers, pushing the price down. See what happened next in the chart below: 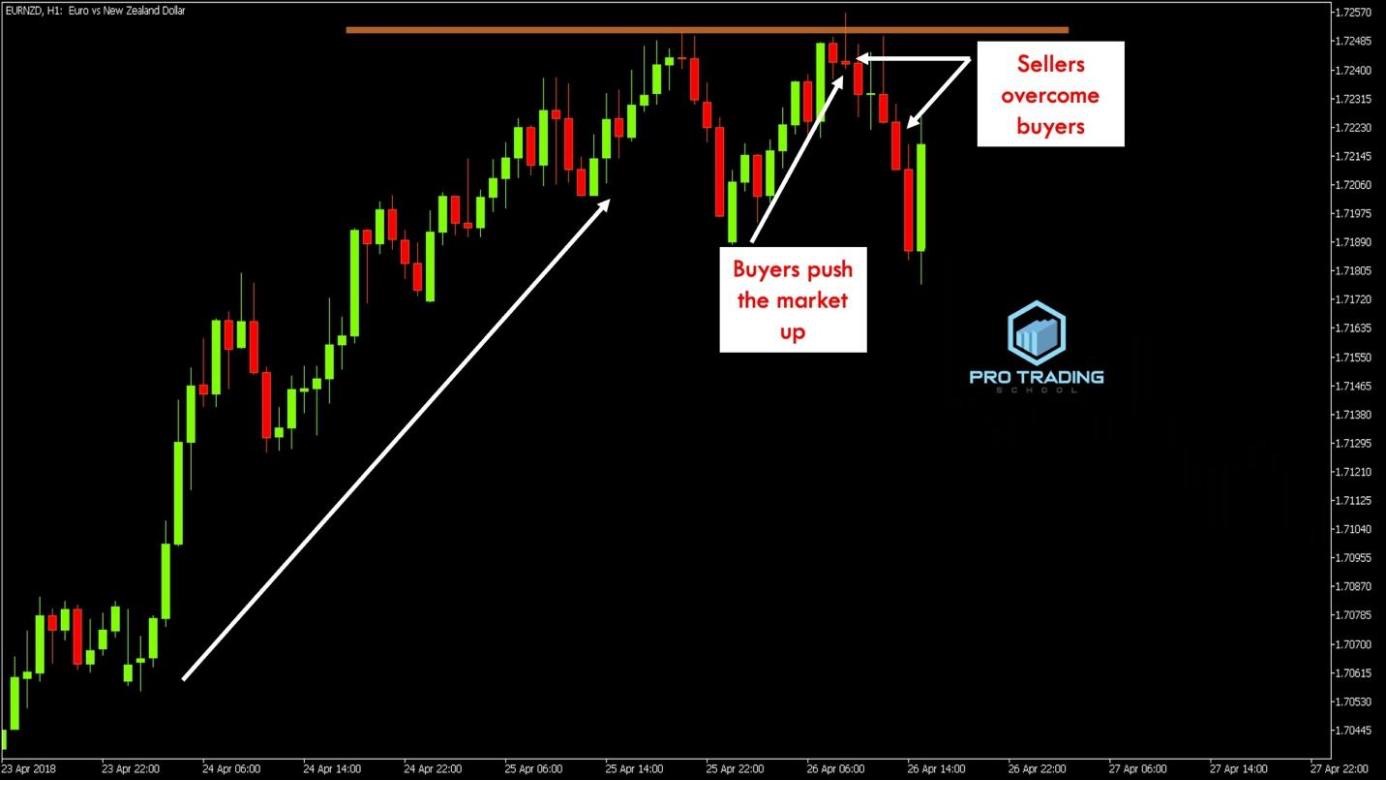 You can see that buyers tried to retake control of the market by making another attempt at pushing price up, thereby forming a support level which is considered as the neckline.

However, as the buyers pushed the price up to the previous high, the sellers came back stronger and drove the price down to the neckline.

So, the initial uptrend is now in question.

Meanwhile, other market participants seeing that buyers were losing strength and getting overpowered by sellers, decide to short the market.

Look at what happened next: 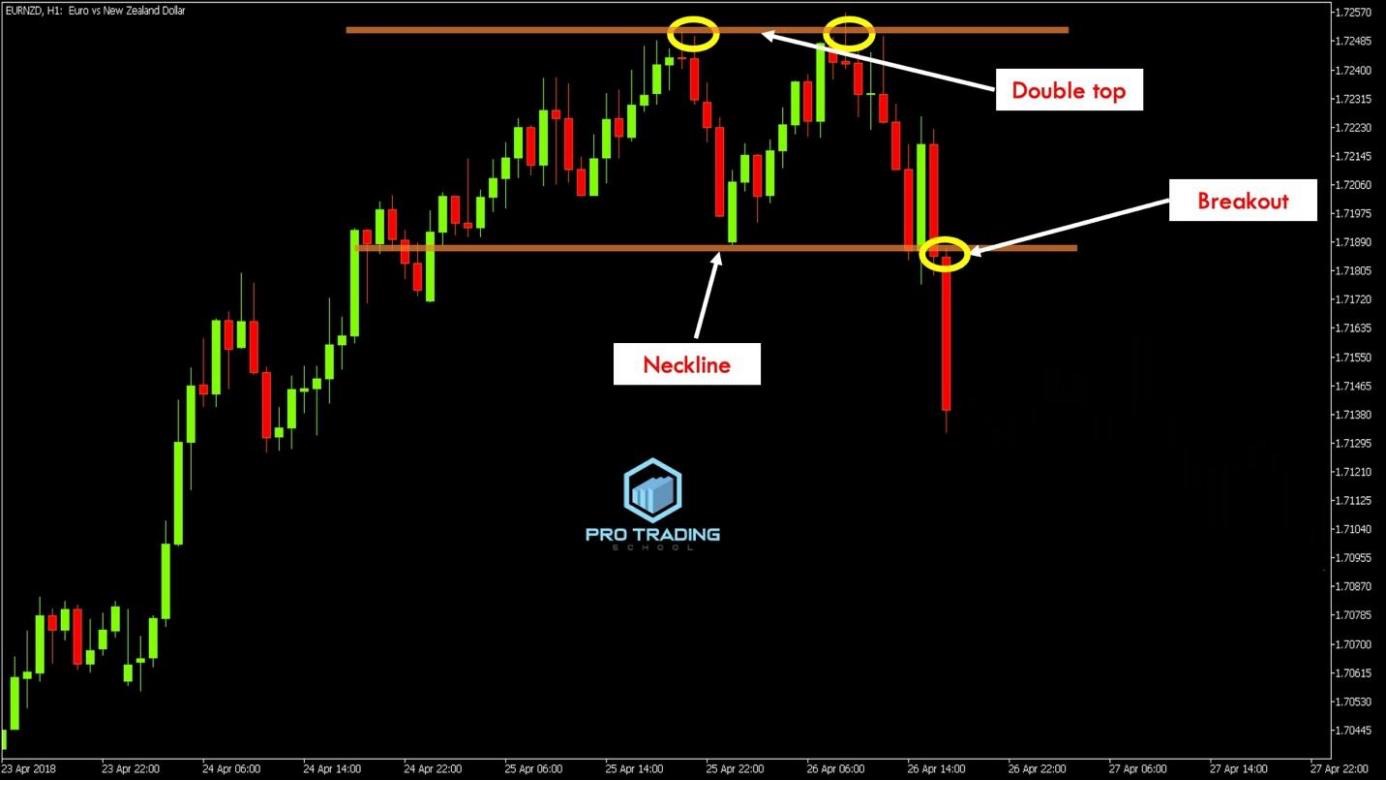 The breakout of the neckline (the support level formed by buyers) confirms that sellers are dominating and the market is likely to reverse.

So, with the double top now confirmed, other market participants will enter the market, causing the price to move further down.

See what happened next: 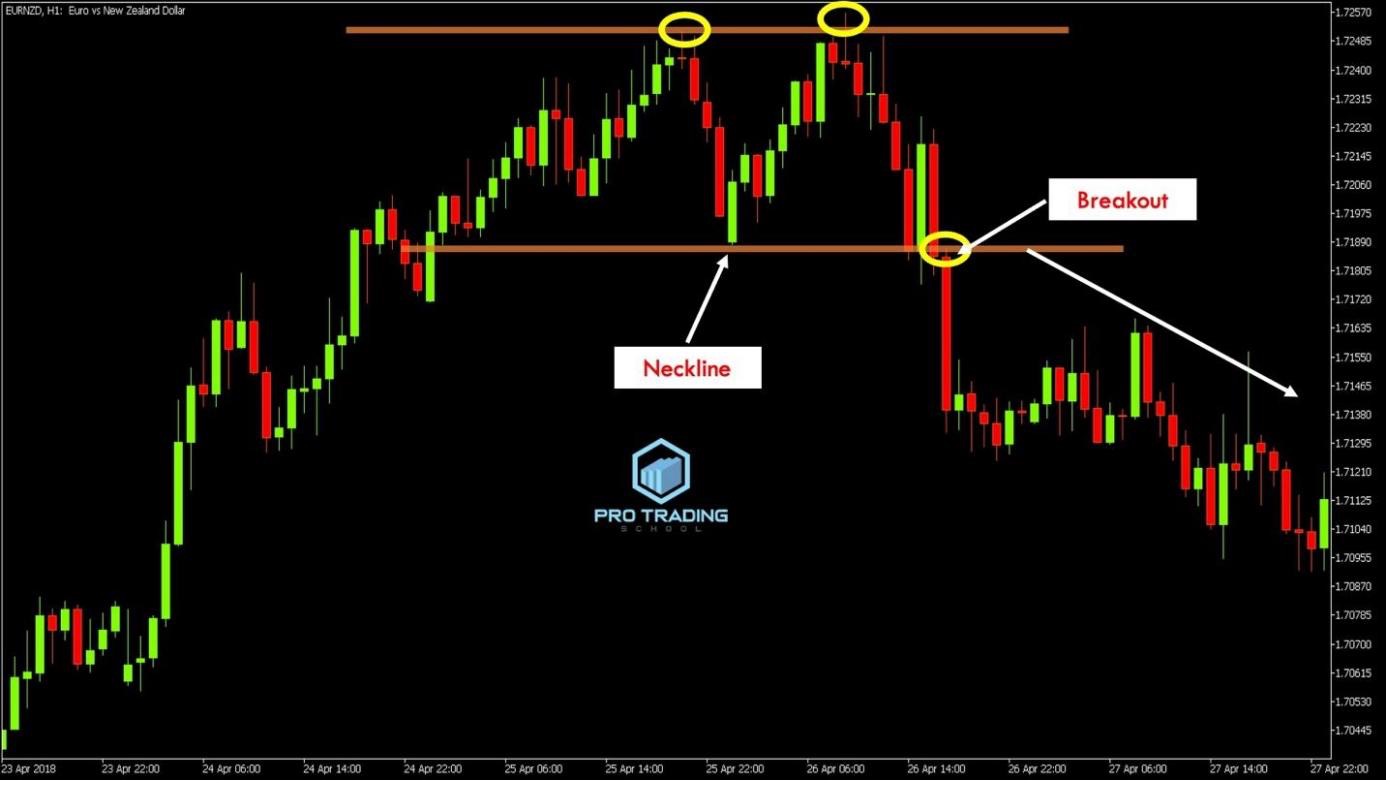 As you can see, after the breakout of the neckline, the market continued to go lower because all market participants have realized that sellers were now in control, so they shorted the market as well to gain from the down move.

In the previous section, you learned how to identify the double top chart pattern and the psychology behind its formation. In this section, you will learn how to trade it the right way.

There are three methods that you can use to trade the double top chart pattern:

Let’s start with the first method. Take a look at the EUR USD H1 chart below: 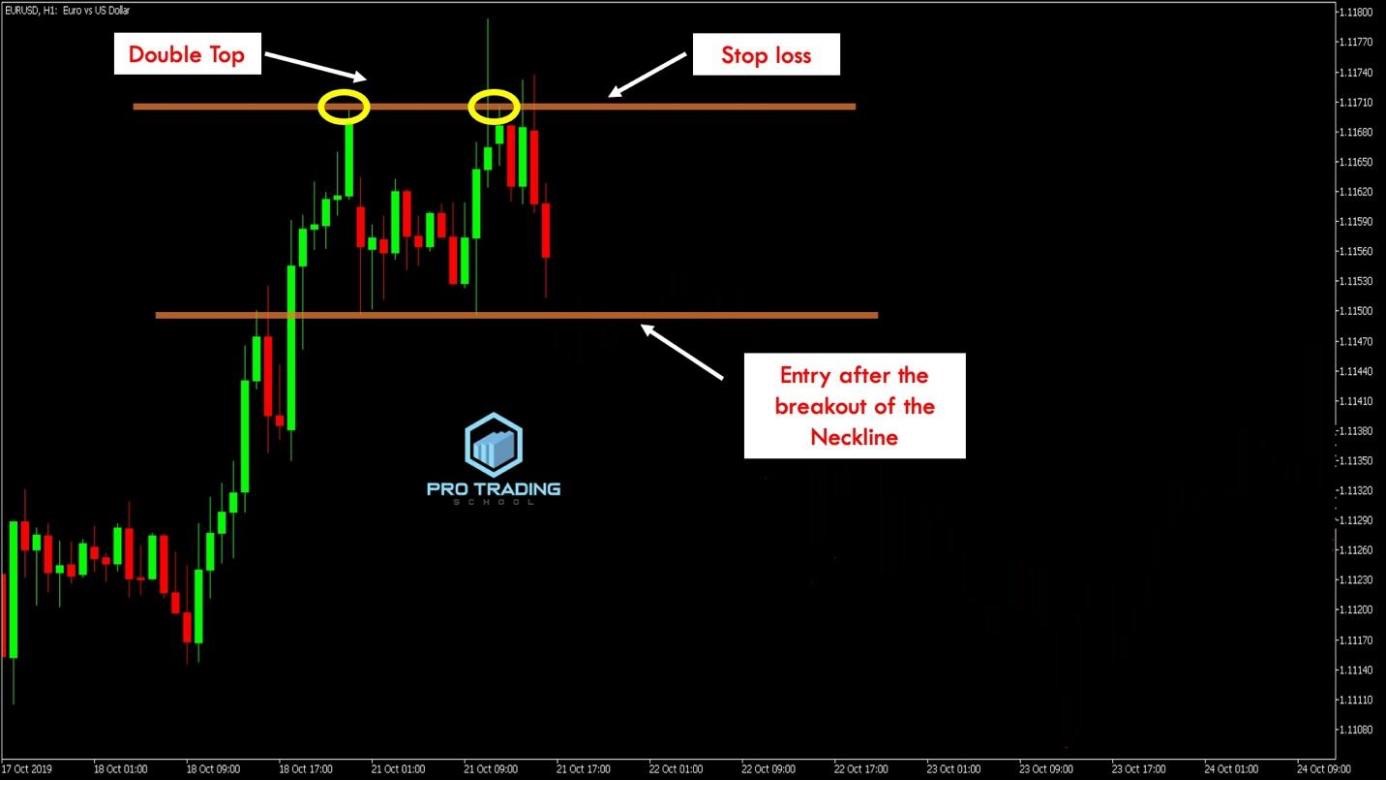 As you can see, the market is trending up indicating that buyers are in control. But the formation of the double top chart pattern indicates a clear bearish reversal signal.

At this point, what you need to do is to wait for the breakout of the neckline. Enter the market at the close of the candlestick that broke below the neckline and place your stop loss above the double top resistance level.

To find your profit target you have to use a rectangle or any other tool to measure the distance between the resistance level and the neckline.

Let me show you how to do it in this chart below: 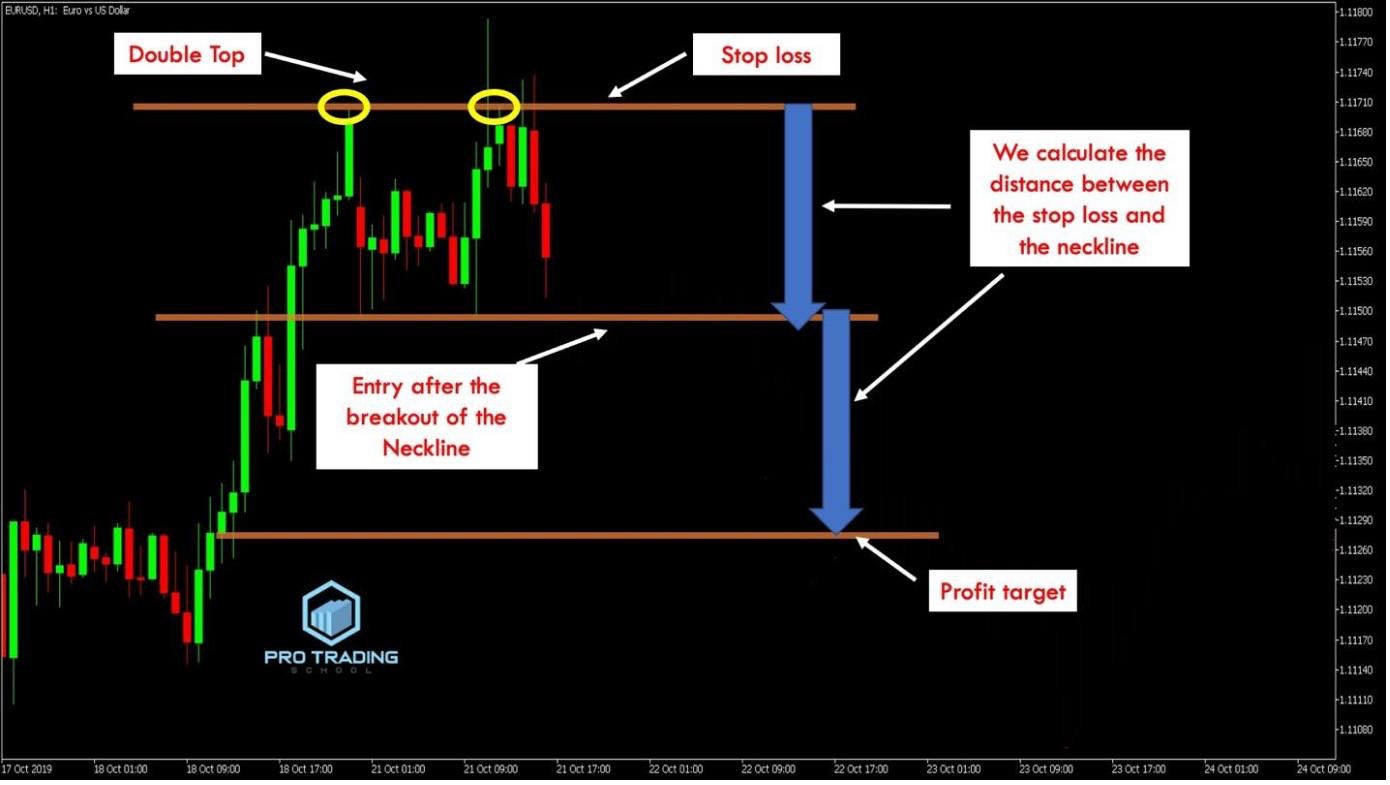 We first calculate the distance between the stop loss and the neckline and then use it to measure our profit target from the neckline.

So, this is what we did. See the same chart below:

As you can see, the price broke the neckline, providing us with a good signal to short the market; we placed our stop loss above the resistance level and the profit target at the level we measured using the height of the top.

Now, look at what happened next: 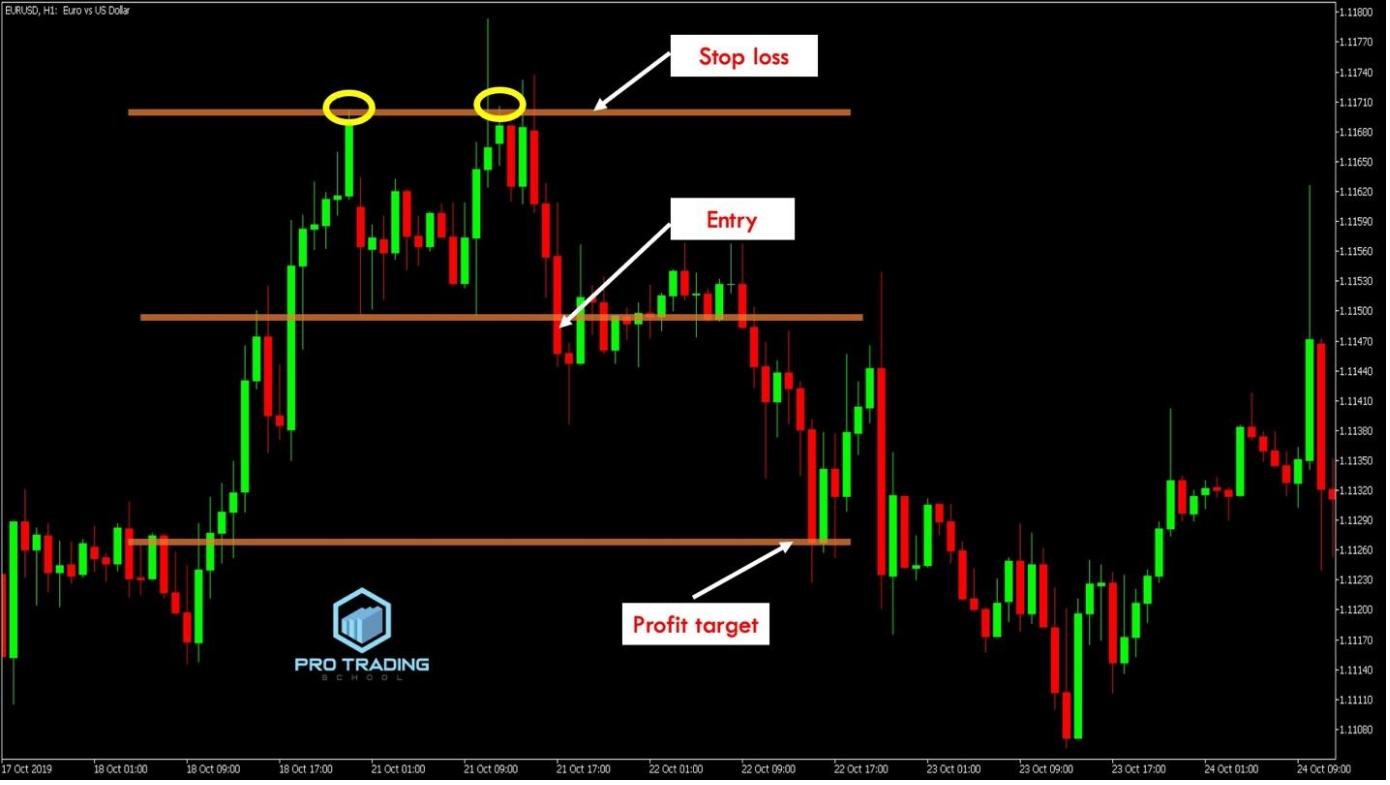 You can see that the market broke the neckline and retraced a little bit before moving down aggressively to reach the profit target.

Let me give you another example. See the chart below: 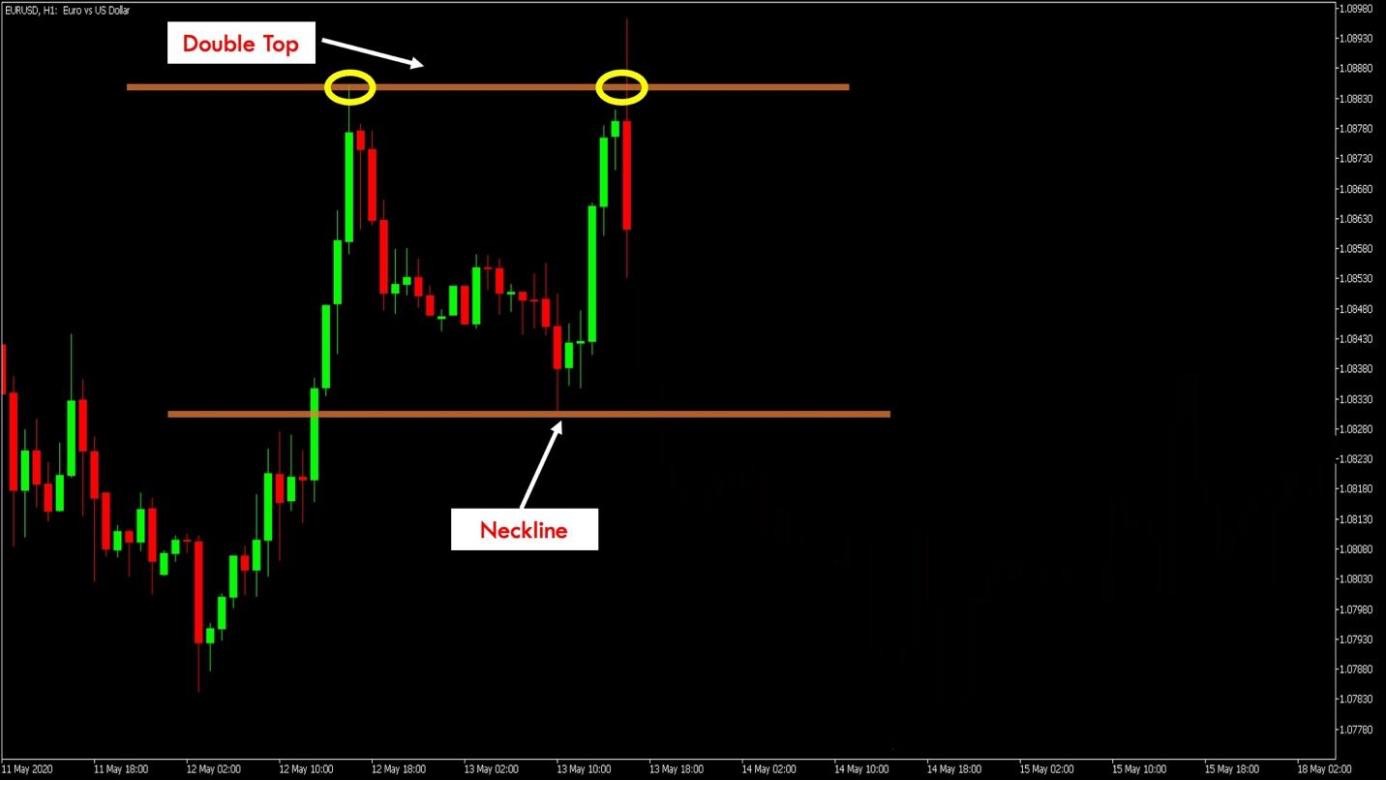 This is another EUR/USD H1 chart, and as you can see, we have a clear double top pattern, which is a bearish reversal signal.

In the chart above, we have identified the neckline, which forms the support level. So, we will wait for the price to break below it. Look at the same chart below to see how we enter a trade: 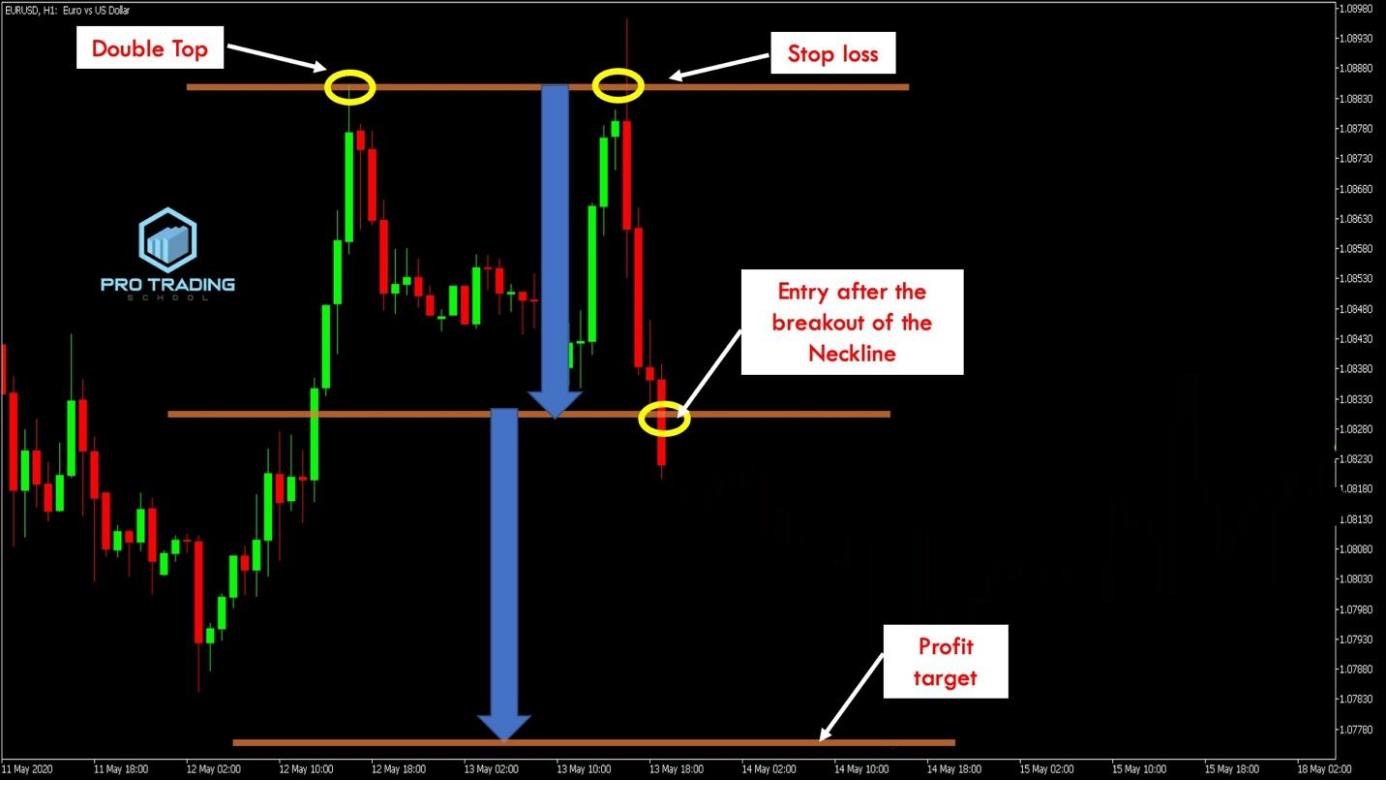 As you can see, we enter the market after the breakout of the neckline. It is better to wait for the candlestick to close below the neckline to be sure that the neckline is broken.

The stop loss is always above the resistance level (double top), while the profit target is measured downwards from the neckline using the height of the double top.

That is, you first measure the distance between the resistance level and the support level (the neckline) and then use it to find the profit target below the neckline.

Now, see what happened next: 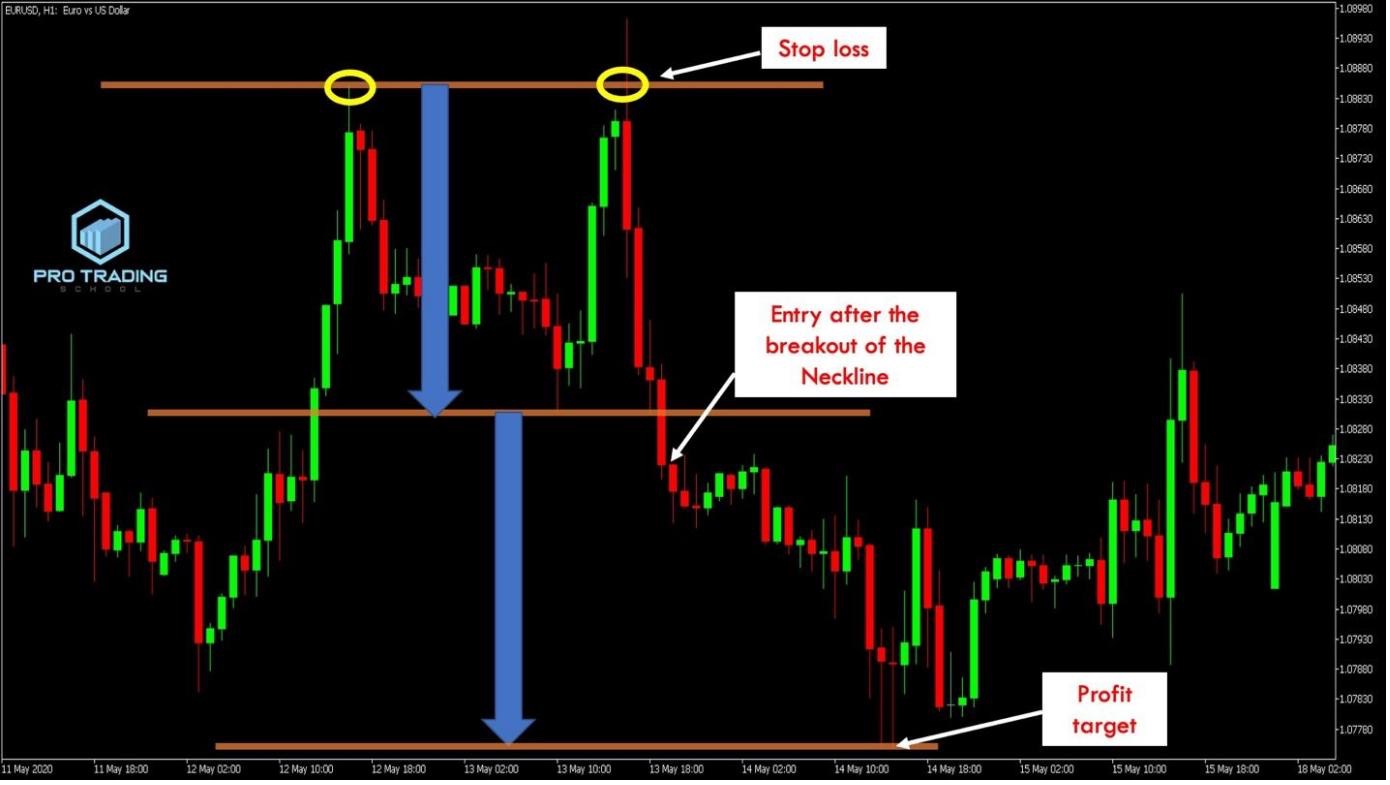 As you can see, after the breakout of the neckline, the market moved down to touch precisely the profit target.

Can you see that the market was rejected immediately after touching the profit target?

the reason is that most traders use the same technique to calculate their profit target.

Look at another example below: 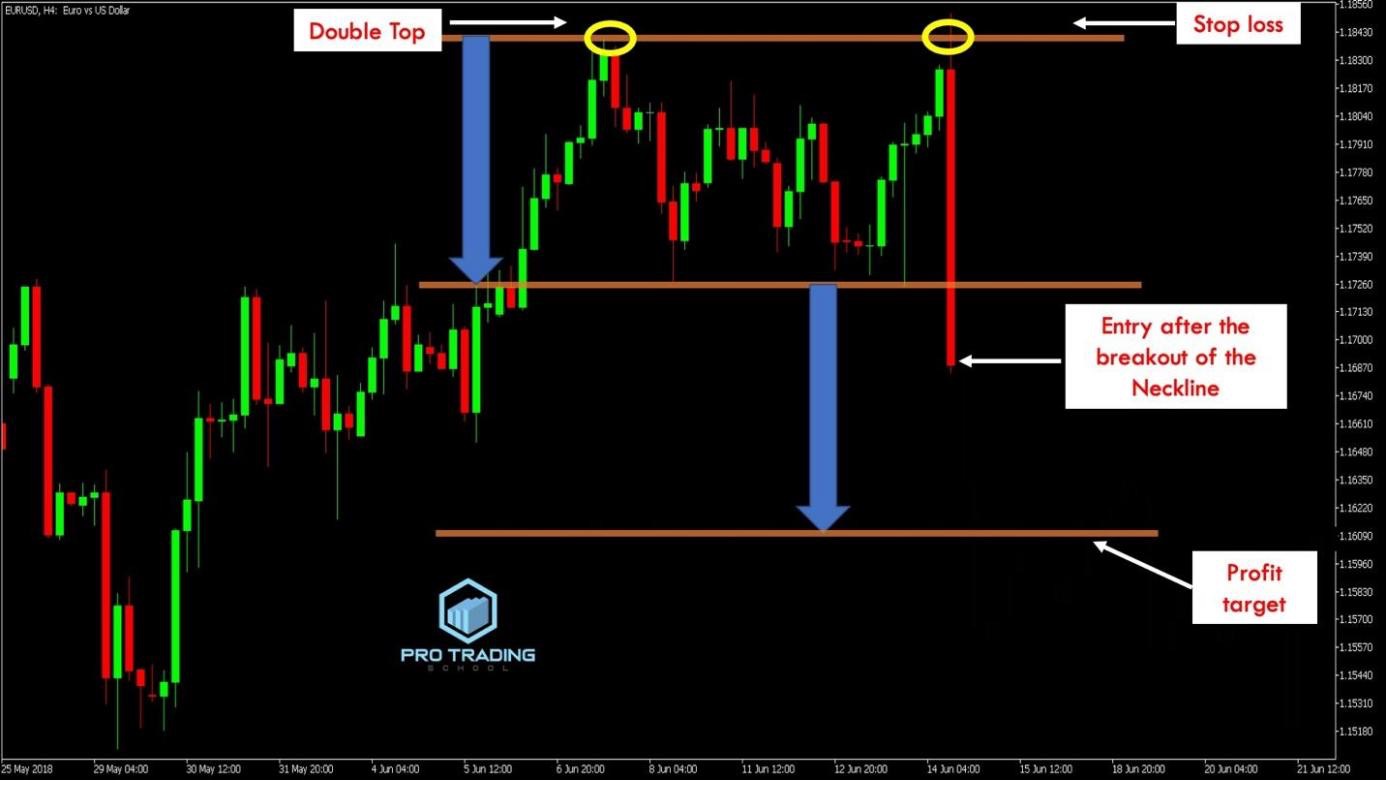 This is a EUR/USD H4 chart. As you can see, the market was trending up, indicating that buyers were in control of the market.

But the formation of the double top pattern showed that buyers were no longer dominating the uptrend, so a bearish reversal was likely to happen.

The breakout of the neckline confirmed that the double top pattern is valid, so we can enter at the close of this bar.

Our stop loss would be above the double top resistance level, while our profit target would be at the next line I indicated, which is of the same distance between the stop loss and the neckline.

Now, look at what happened next: 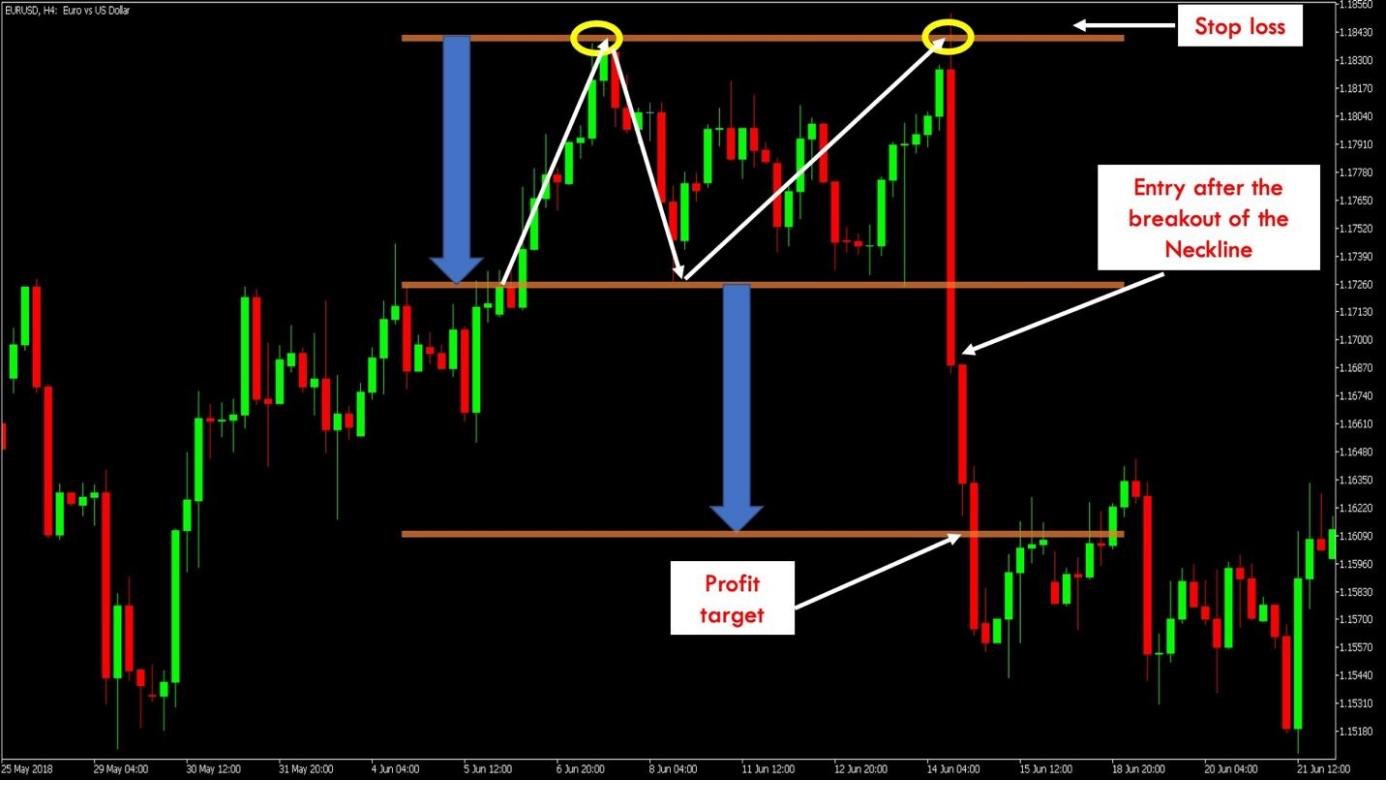 As you can see, the market moved down to reach our profit target.

Using this entry strategy to trade the double top pattern has advantages and disadvantages:

The first advantage of this entry technique is that you will never miss this trade whenever the breakout occurs, and the win rate is positive (it exceeds 90%).

The drawback of this entry technique is that the reward/risk ratio is not good enough.

However, this is not an issue: if you can win 90 % of your trades, you will always be profitable.

I’m not trying to defend this trading technique or recommend it; we are different, and we have different personalities.

While there are a lot of students who will do well with this entry technique, others may find other entry techniques, such as the pullback entry technique that I will cover in the next blog post, better for their style.

In this post, I have shown you how to identify a valid double top chart pattern and one of the ways to trade it.

You can learn more profitable trading strategies from our free Telegram channel. In that channel, we interact and share more knowledge, and I also give out 2 to 3 free live Forex signals per week.